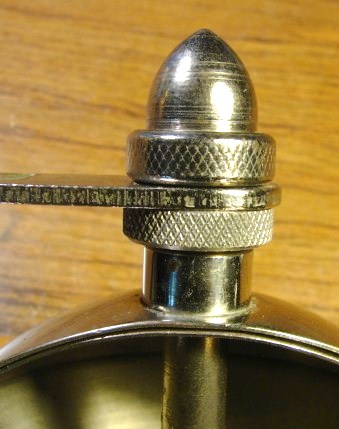 500 Grinders:  What I learned about vintage European Hand Coffee Grinders by taking them apart and putting them back together again.

Hand coffee grinders are small utilitarian objects manufactured for one purpose.....grinding coffee beans.    I have restored grinders over 100 years old and grinders less than a year old and in some cases, like an old pocket watch, took them apart just to see what makes them tick.    Some grinders were all hand made and as the evolution of the grinders progresses more and more mass production methods were obviously used.   Hand coffee grinders, by their sheer numbers represented a large vibrant industry in the European manufacturing sector, logically so, for before the introduction of preground coffee the coffee mill was the only way to process the bean to the brew.  Before getting in to specifics of grinder construction and design, a few general observations:
The concentration of our grinder restorations have been with German hand grinders: Robert Zassenhaus (Zass), Peter Dienes (PeDe), Kissing und Mollman (KyM),  C.A.Lehnartz, Armin Trosser (HT and AT as well as Trosser rebrands), Leinbrock's (Czech),  Ahner of Austria,  Italian mills such a PB, DP, Fraber  and Tre Spade,  French grinders by Peugeot Freres, the DeVe mills from Holland, and other obscure or simply less common brands. 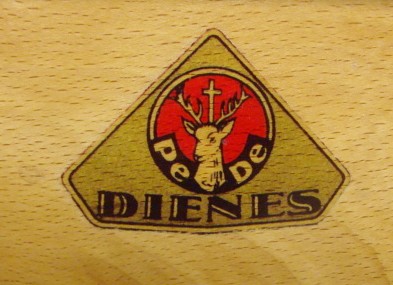 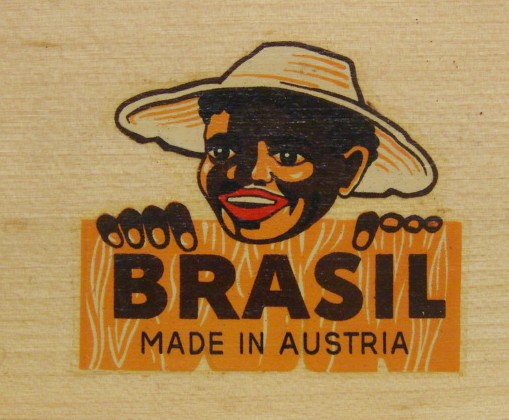 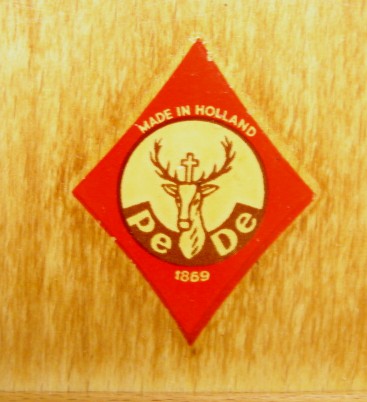 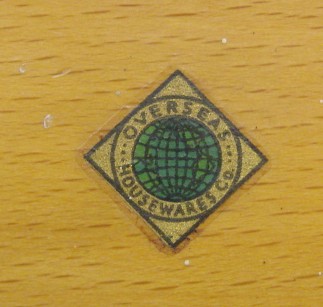 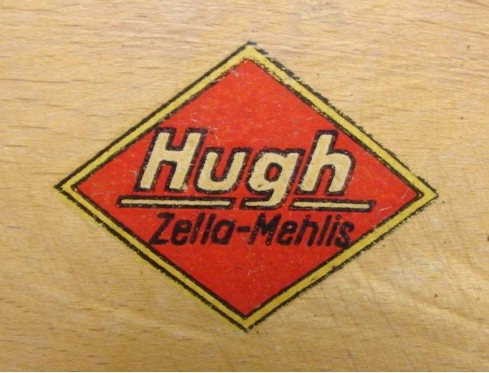 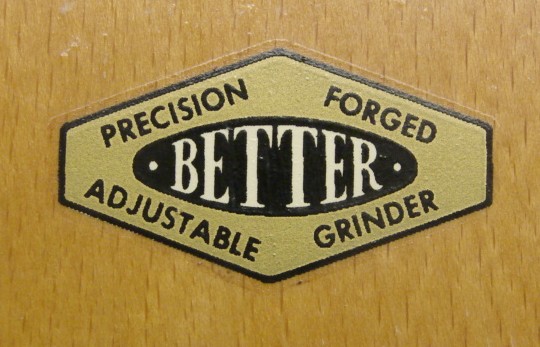 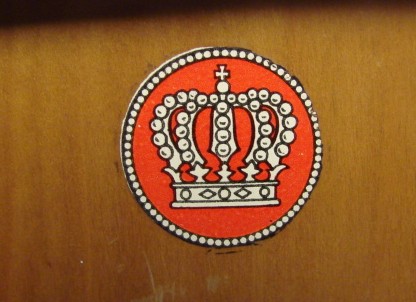 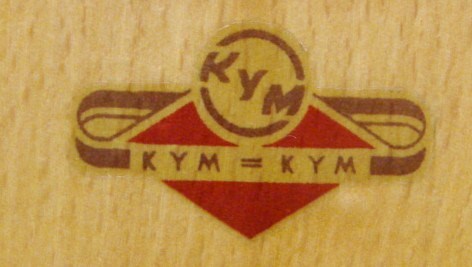 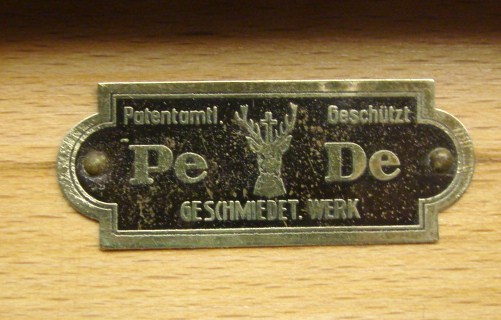 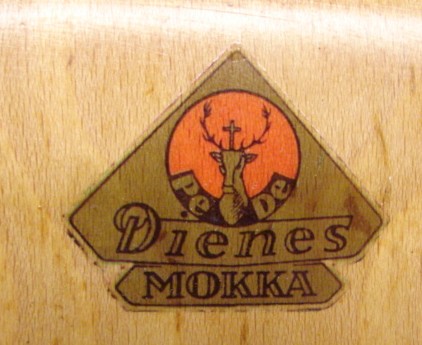 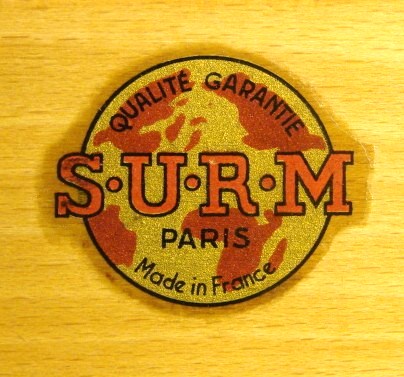 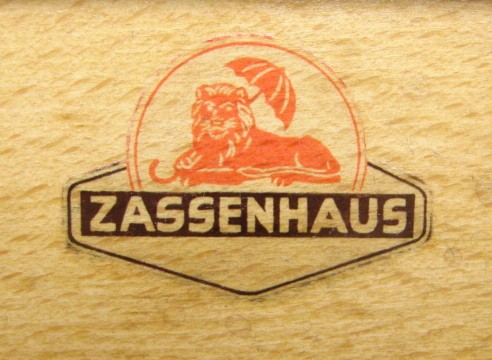 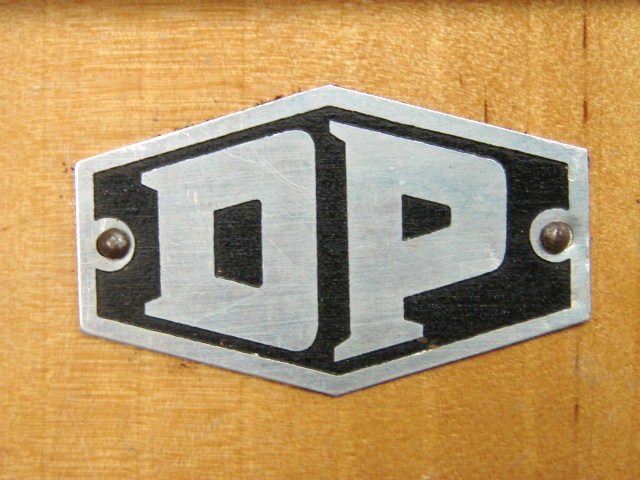 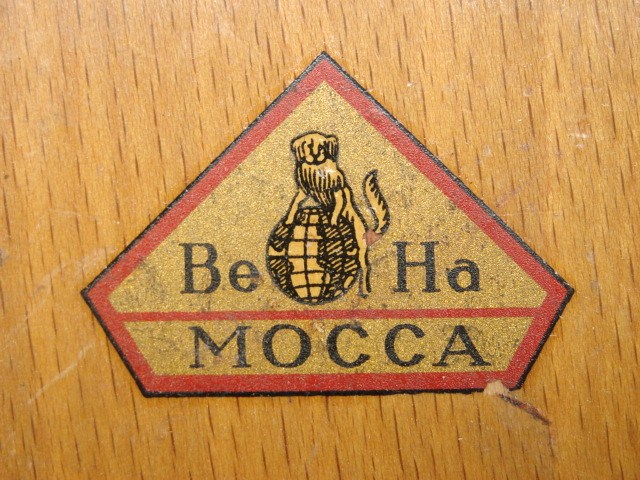 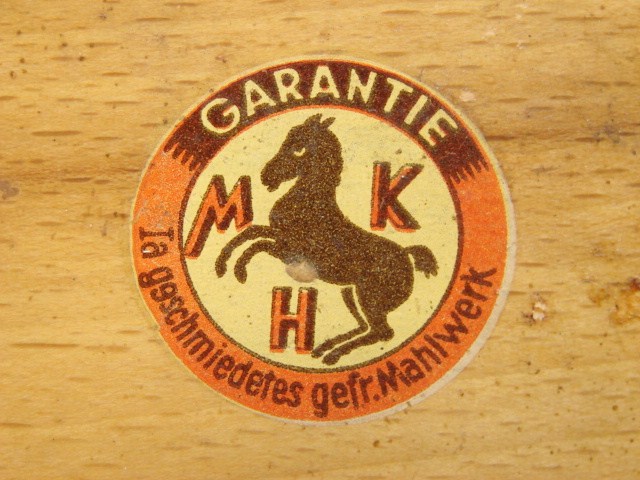 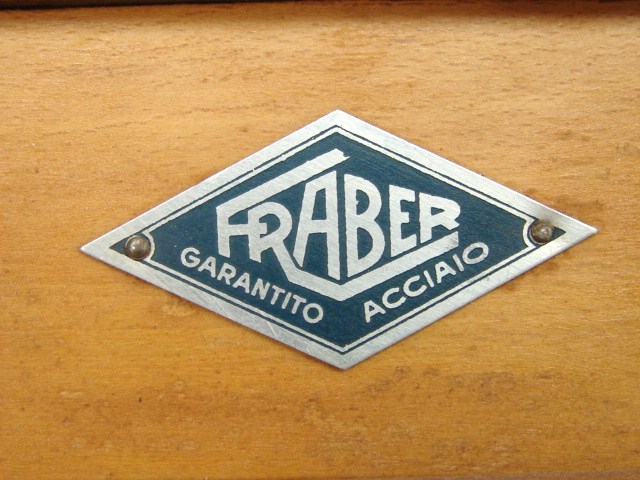 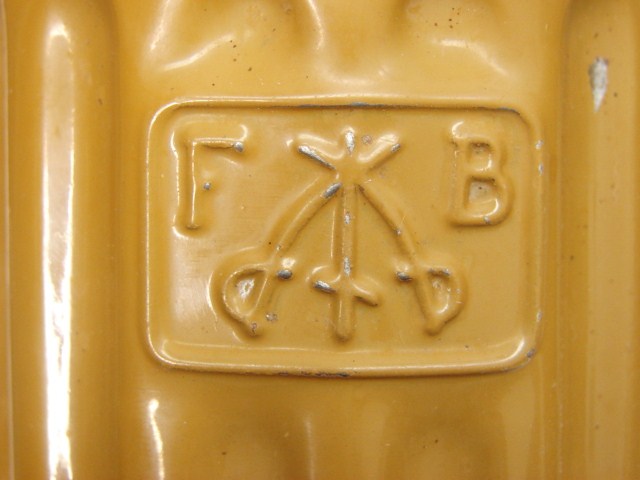 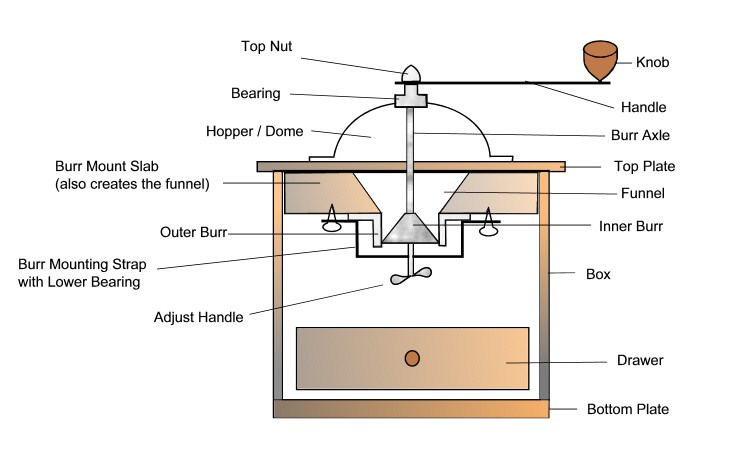 The coffee mill is composed generally of two parts, the box, and the grinding mechanism.    The box is composed of the outer wood frame of the box, the top wood plate and the bottom wood plate.   The grinding mechanism consists of a lower and upper bearing, inner and outer grinding burr,  a hopper/funnel system, and some adjustment mechanism for loosening and tightening the grind setting.    This adjustment is always made by forcing the inner burr upwards into the outer burr either by pushing from below or pulling from above.   The box components are assembled with nails and/or screws and the grinding mechanism is installed with screws although sometimes the outer burr is fixed in place and not removable or adjustable.    This drawing is of the more modern dropped hopper grinder design.....the older design used an exposed funnel/hopper and independent top bearing. 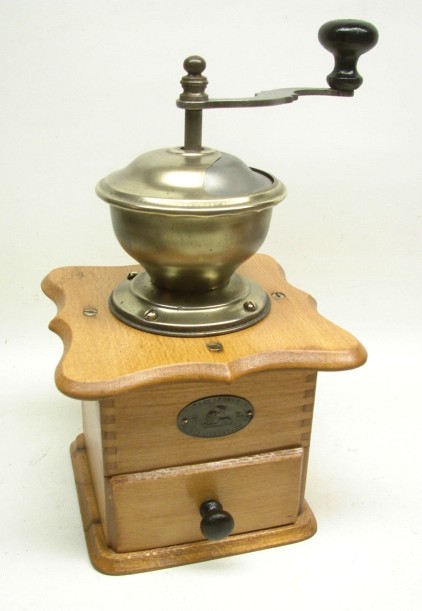 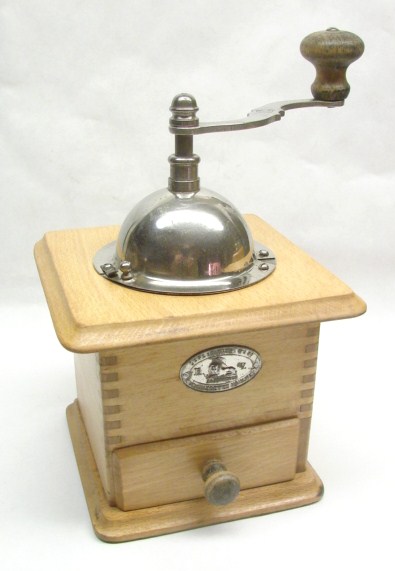 These are two Zassenhaus grinders of about the same era.....the grinder on the left has an exposed top funnel and the one on the right has the bean funnel recessed into the top plate of the box.     This is an important design change for all hand grinders.....a great leap forward of sorts.     The revolutionary change here is that on the old school grinder, exposed funnel, the outer burr was affixed directly to the bottom of the thin wood top plate and the hopper was made of thin stamped brass, generally chrome plated, made in 3 parts:    the funnel with screw holes to to wood plate and the top and door mechanism, made in two parts which slide over each other, all thin brass made by a stamping process.   These parts had to be hand fit and assembled.   The top bearing is a heavy steel V shape also attached to the wood plate, an upside down   V. 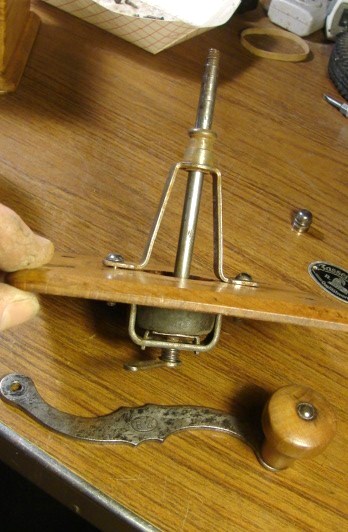 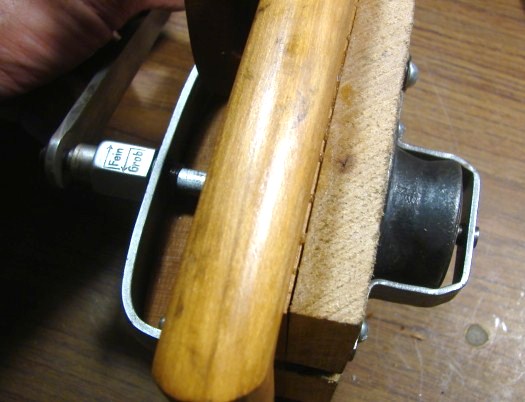 When thinking about this design change a few observations immediately spring to mind.   First, the old school design required an extremely long burr axle.   This long axle affixed to a turning handle creates a greater lateral force at the top bearing than does a shorter burr axle leading to greater potential for bearing wear.    Also, the lower bearing which houses the adjustment lever in this case is at the extreme top level of the box, making it a long reach for finger adjustment made necessarily through the drawer opening.   This design shows a combination of difficult factors, first the thin brass hand assembled (and easily damaged) exposed funnel and the long burr axle subject to increased lateral forces which demand a much stronger top bearing for longevity.    By applying the thick wood block UNDER the top plate and forming the funnel IN the wood rather than of formed metal the design could be tweaked infinitely.   The burr was now much lower in relation to the drawer opening (and the drawer), and for the first time the upper bearing could be incorporated into the hopper dome or into any structural top hopper element that the designer could devise.    The burr axles could be shortened thereby reducing lateral forces on the upper bearing and the entire mechanism could be for the first time reduced in size.    This structural change in top plate design of the box is likely the most critical development leading to the Golden Age of hand grinders.....at once improving the stability of the grinding mechanism and allowing  much greater flexibility of design of the entire box.    The inner burr block could be made of a cheap but tough non decorative wood and simply glued to the decorative top wood plate....this design change was indeed the great leap forward and all other design advances built on this simple rough wood block.

This design advancement had certain ramifications for both grinder design and manufacture.    In the old school design, the top bearing could be made heavy and strong, as thick as need be to sustain the turning forces.   The hopper/funnel is completely independent of the upper burr and functioned only to contain the beans (the bottom collar is also a spot for the accumulation of old beans and grounds, against the wood plate).    The new design allowed the use of a lighter and thinner top bearing since the turning forces were lessened by use of a shorter burr axle.   From an ergonomic point of view, the big top funnel of the old school mills are very easy to hold at the small point of the funnel.    The boxes are larger in general to allow finger access to the burr adjustment and in many cases can be described a "Lap Mills"....they are generally easy to turn and hold and in most cases a quality mill of this era grinds a very even medium to coarse grind with little effort.     The large steel burr was long lasting and the burr itself was very understressed and usually had a burr adjustment lower bearing that did not force the burr close together to grind against itself and become overly dull.    But from a manufacturing and design standpoint, lowering the funnel into an added wood block made sense....shorter burr axle, more stability, the ability to use a lighter duty top bearing and once again, consumer preference came into play as the new look was just that, NEW!    No longer did one think of Heidi and Grandpa, but of a whole new look and feel for the kitchen.    MODERN!    And for the manufacturer, also cheaper to make, less materials, cheaper materials (the wood block could be lined or unlined, varnished or not) and the top plate could be made of wood that was decorative and light, the crude underblock doing all the work.    This block also helps keep the top wood from splitting or warping, again adding stability to the entire design.

Of course, progress always comes with a cost, for with the new design ethic, we no longer will see grinders such as this beauty from the Old School 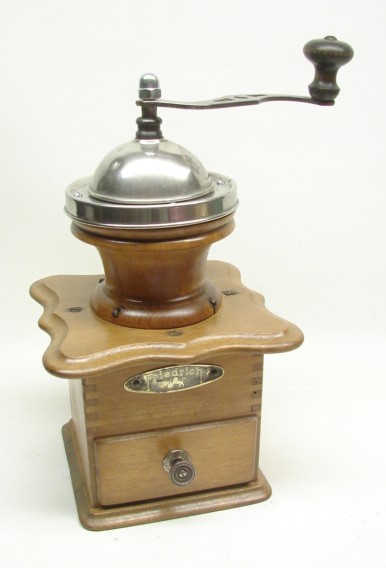 The use of the dropped funnel allowed grinder design to really take off in many new and interesting ways.....materials for the hopper top expanded greatly into bakelite thermoplastics, chrome plated brass, painted steel,  chrome steel straps with wood doors, and a wide array of hopper dome and door designs.   The key element was that the top axle bearing had to be incorporated into the top design in some manner.   The most obvious was the use of steel cross strap which held the upper bearing.   This design could be painted or plated and often was accompanied by the use of wood "clamshell" doors,  and either one or both of these wood doors open by the use of a swivel screw at one end.   Another common early bearing was a steel pressed dome which contained the upper bearing press fit into the formed steel.    This design was simplified by using a simple rounded dome with a press fit bearing....a very economical design and one of the most stable top dome/incorporated bearing designs.    Of course, chrome plated thin brass was continuous through all production, again a consumer preference and these domes were rounded or flattened with press fit bearings, with the door either a swivel around the central bearing or a spring hinged door of almost any shape.   Ova tops with spring door in the KyM models, rectangular tops with small spring door in PeDe and Zass, as well as double doors in some Zass models.   From a functional standpoint, when the upper bearing is isolated either in a strap or on a non revolving half of a dome there is more stability than on the revolving central pivot dome doors.     These are the designs that the revolving door rotates under the fixed half of the hopper top.  Often this design has the press fit bearing attached to the revolving part of the door and the press fit can loosen over time and the upper bearing becomes wobbly.   The goal here is stability and durability of the upper bearing and anything that degrades the stability can lead to grind inconsistency and eventual grinder failure. 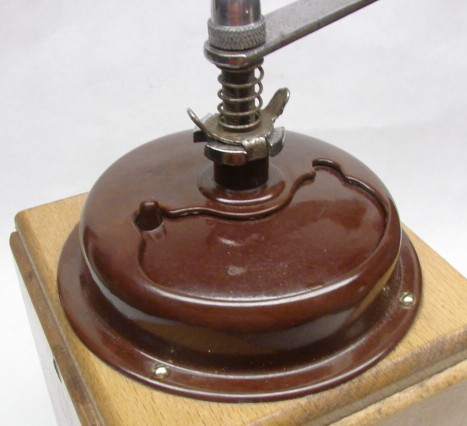 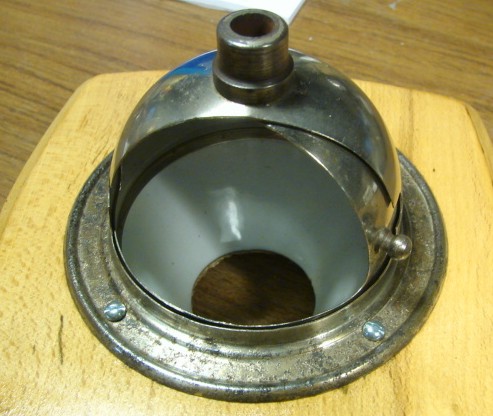 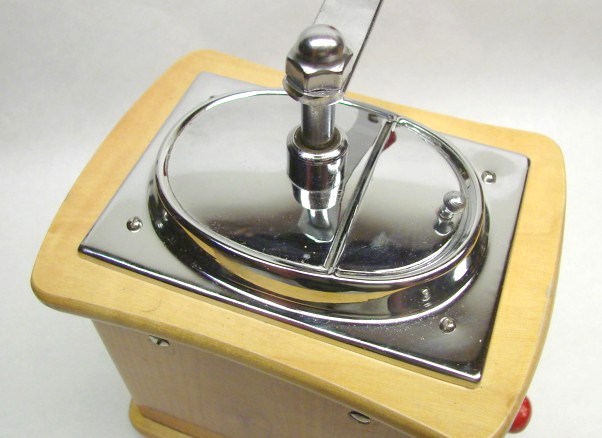 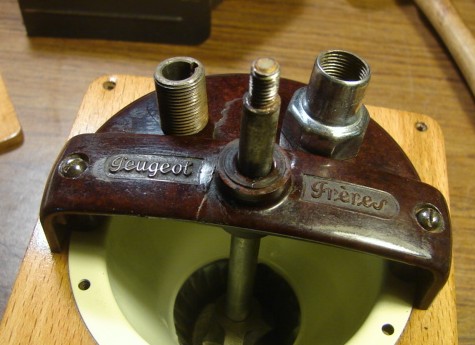 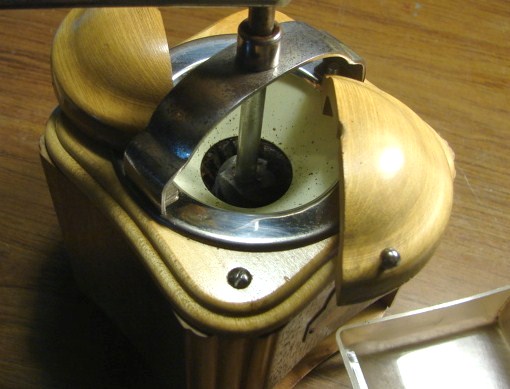